Fort George G. Meade, located mid-way between Baltimore and Washington, D.C., is home to all five branches of the military service – Army, Navy, Air Force, Marines and Coast Guard. Fort Meade is home to more than 115 government agencies and organizations including the National Security Agency. 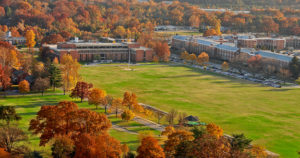 Fort George G. Meade, located mid-way between Baltimore and Washington, D.C., is home to all five branches of the military service – Army, Navy, Air Force, Marines and Coast Guard. Fort Meade is home to more than 115 government agencies and organizations including the National Security Agency.

Fort Meade is Maryland’s largest employer and has the third largest workforce of any Army installation in the continental United States. There are more than 56,000 military and civilians on the Installation. Over the decades, Fort Meade has experienced robust mission growth. With 118 military, intelligence and civilian agencies now located on post, Fort Meade ranks as the third largest military installation, by population, in the U.S.

While a wide variety of commands and agencies have been attracted to the installation, Fort Meade has established itself as our nation’s preeminent center for information, intelligence and cyber operations. Fort Meade is home to six of the top eight Department of Defense cyber commands: The creation of Fort Meade was authorized by an Act of Congress in May 1917, and was one of 16 cantonments built for troops drafted for World War I. The fort’s present site in central Maryland was selected in June of that year because of its close proximity to the railroad, the port of Baltimore and Washington D.C. The construction cost was $18 million and the 5,400 acres of land on which the fort sits sold for $37 per acre in 1917. The post, first established as Camp Meade, was named in honor of Major Gen. George Gordon Meade, whose victory at the Battle of Gettysburg in 1863 proved a major factor in turning the tide of the Civil War in favor of the North. During World War I, more than 400,000 soldiers passed through Fort Meade, which was used as a training site for three infantry divisions, three training battalions and one depot brigade. The post remount station, under the direction of Major Peter F. Meade, a nephew of General Meade, collected over 22,000 horses and mules during this time. The “Hello Girls” – women who served as bilingual telephone switchboard operators in the U.S. Army Signal Corps during World War I – also were an important part of Fort Meade’s history.

In 1928, the post was renamed Fort Leonard Wood, but Pennsylvania congressmen, who were angry at having the name of native son George Meade removed, held up the Army’s appropriations until it agreed to name the new permanent installation Fort George G. Meade, which it did on March 5, 1929.

During World War II, Fort Meade became a training center whose ranges and other facilities were used by more than 200 units and roughly 3.5 million soldiers between 1942 and 1946. In March 1945, Fort Meade’s wartime military personnel peaked at 70,000.

Your ticket for the: Fort George G. Meade